About two weeks ago, I launched Pancake.io. It was a side project I'd been working on (then) for a couple of weeks.

By launch, I really mean that the capricious gods of Getting Media Coverage gave me a boon, ReadWriteWeb picked up the story, and things got going.

The following is a reflection on what worked for Pancake.io. It isn't prescriptive, because if you haven't tried something before, it can be hard to tell good advice from bad. In fact, doing what I did probably won't work for you. That's the nature of these things, and it's okay. The best thing you can do is to find out what other people have done, and then try lots of different thing yourself. Humans are good at pattern matching, and if you're a programmer you're probably doubly good at it.

Also, just so everyone is on the same page: Pancake.io is a service which enables you to host simple static websites, like this blog, right out of a Dropbox folder.

In the past two weeks, Pancake.io has received about 9,000 unique visits. As of this post, 1,718 people have signed up, and @pancakeio has 422 followers. Over 1,000 different pages have been served from Dropbox folders. In addition, 36 people have filled out the early adopter survey.

When Pancake.io was just about presentable, I attempted to post it to Hacker News a couple of times, but only succeeded in botching it twice. A few days later, I emailed the catch-all emails of 11 tech sites and blogs whose readers I thought might be interested in Pancake.io. This post about Startup Marketing by the founder of Balsamiq was instructive, but even then, my emails were mostly ignored.

However, as luck would have it, one person did get back to me: ReadWriteWeb was interested in writing about Pancake.io, and that has made all the difference. A week later, Lifehacker also covered Pancake.io, bringing in about 3,000 visits on the first day. 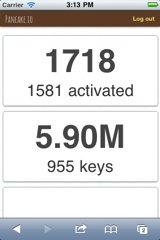 Give stuff away: power user features

When Pancake.io launched, the custom domains feature hadn't been completed yet. Rather than omit it entirely, I left a note on the settings page asking people to send me a quick email if they wanted early access to the feature. I thought it'd be a great way to gauge interest and hear from some early users.

The feature was in a working state by the end of that first week, and I was ready to email the 16 people who had expressed an interest. It occurred to me that since they'd taken the trouble to email me, they'd probably be willing to answer a few questions about they were looking for, which in turn would help me to prioritize new features. This article by Cindy Alvarez was especially helpful in deciding what questions to ask.

So far, the feedback has been terrific. Among other things, I'm learning a lot about what people are expecting, what problems they are trying to solve, and how much they are willing to pay. I've discovered that people are using Pancake.io for class websites, landing pages, iPhone and Android app sites, and personal websites. The best part is the encouraging comments that people have left, which have inspired me to stay up till the wee hours of the morning building new features.

I believe it helped that the feature I was giving early access to was aimed at advanced users. The people who ended up answering the survey were able to clearly articulate what they were looking for in a hosting service, and what their needs were.

If you're a Pancake.io user, you can check out the early adopter survey here, and if you fill it in you'll get access to the custom domains feature too. 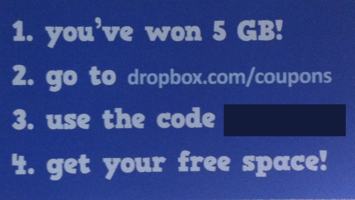 If these things stacked, my Dropbox would be bigger than my hard drive.

Of all the things I've done so far with Pancake.io, this is probably the one I'm least sure about, despite being rather effective so far. Being a developer, I want believe that a product can stand on its own merits - "build it and they will come!" - without having to resort promotions only tangentially related to the product.

Nevertheless, after Lifehacker wrote about Pancake.io, it seemed foolish not to try to make the most of the surge in traffic. I quickly put together a giveaway for a Dropbox 5GB space card I had in my possession, largely inspired by reading this post by Bill Bolmeier. Insofar as it has gained the @pancakeio account over 400 new followers so far, it has been a success.

I had also considered a contest to get Facebook likes, to have people email friends about the site, or to encourage actual sign ups. However, none of these were very satisfying: I wasn't sure how to track Facebook likes, and it wasn't particularly suited to future communication anyway; email referrals can be spammy; and I didn't want too many users since the product was (and is) still under heavy development.

Not much to say here, except that having New Relic monitor Pancake.io helped alert me to the Lifehacker traffic almost immediately as it began. Google Analytics, on the other hand, helped to reveal early on that Twitter was sending a steady, if small, trickle of traffic, and that tipped the balance in favor of eventually running a Twitter contest.

All in all, it's been a crazy two weeks. With feedback in hand, and real users on the site, the work has only just begun. I'm not sure where this road leads, but I'm excited to find out.